For I Know the Plans

We are a little different than most high schools in that we hold mid-year graduations at the end of the first semester which falls around this time in mid-January. There are students who just have a few credits to make up at the beginning of the year and it doesn't make sense for them to have to endure the whole year of school if they've completed all of the requirements. 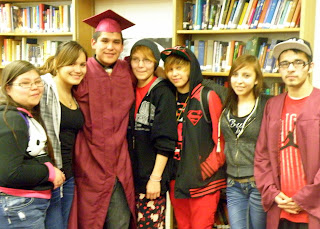 It’s usually a very emotional time for everyone involved, students and staff alike. As we’re a boarding school for Native American teenagers, many of the students come to live with us during their freshman year and remain throughout their four years. We become a community of folks who laugh, cry, love and discover life together. For many of the kids, the staff and other students at the school are the closest thing they've ever known to being a part of a functional family. A lot of their backgrounds include legacies of drug and alcohol abuse. Often kids are raised by aunts and uncles or grandparents because parents are not able to. The American Indian community in general experiences a great deal of loss due to suicide, substance abuse and accidental deaths.

It’s with mixed emotions then that we see these kids head out to their future. We know they need to go find their way in the world as adults and to go on to discover life and their purpose. I need to cling to the verse in Jeremiah 29:11 that says, “For I know the plans I have for you," says the LORD. "They are plans for good and not for disaster, to give you a future and a hope.” As much as I love these students as I do my own children, I have trust that God cares for them even more and He has amazing plans for each of their lives. I must trust that He will continue to make Himself known to each one of them. And I need to trust that in following God, their lives will be protected and not end in disaster which is so often the case for this segment of society.

It’s been as much a test of my own faith as it has been for the students I serve.
Posted by Unknown at 4:02 PM No comments:

Taste and See That the Lord is Good

We began our third year on campus at the Flandreau Indian School with a bang. With many returning students knowing the Chaplain and the program, more parents than ever (almost half of the 250 students!) have given written permission to the school for their kids to attend worship services in town. Trust with students and parents has increased dramatically this year. 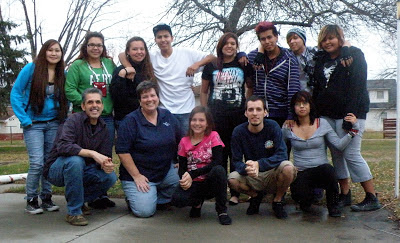 Numbers in attendance have been up all over. With weekly outreach programs aimed at reaching all students, Sunday afternoon chapel on campus, Bible studies and local worship services, there are lots of opportunities for students to “taste and see that the Lord is good.” (Psalm 34:8) Many are experiencing church for the first time and realizing that church is really not a scary place.

The exciting part of this year has been seeing lives in the process of transformation… encouraging Facebook statuses, positive music choices, students caring for students and challenging each other to live a more positive lifestyle, being able to pray with students before bedtime and as their day begins, inviting each other to go to church, and so much more. We have started small group Bible studies on campus midweek to explore the weekend messages a little deeper and apply the truths revealed in Scripture. Students have begun to take ownership of their faith. How exciting to see God at work!

Posted by Unknown at 1:58 PM No comments:

The Flandreau Indian School Chaplaincy Program is a privately funded ministry provided by a partnership of churches and individuals.